For the last three years, city officers from five European cities have met regularly through the Connection project as a community of practice to learn about One Stop Shops.

What is a One Stop Shop?

A ‘One Stop Shop’ is a type of service delivery model based around a welcoming space, where migrants can access multiple specialist services that support integration, all under one roof. These services are often aimed at newcomers

Supported by MigrationWork, Dortmund, Stockholm, Athens, Cluj-Napoca and Sofia have all learned about One Stop Shops by ‘doing’. Over the course of the project, four of the five cities in the Community of Practice opened their own One Stop Shops to better welcome and support migrants. The fifth, Athens, opened their service in 2017 and served as an inspiration.

One Stop Shops are becoming increasingly popular as a service model amongst cities in Europe and there is a lot of interest in how to go about designing effective and successful ones.

At the Connection final meeting in Utrecht members of the community of practice wanted not simply to tell the audience what they learned: they wanted the group to learn by doing, as they had, although in this case, it would be through an immersive theatre game. The aim was for the audience to explore some of the challenges inherent in One Stop Shops, so they might experience good practice and understand what is important when designing a One Stop Shop.

The audience were divided into three groups and given the task to collect five stamps on a little card from different service desks in the One Stop Shop. Each stamp symbolised a step in their integration journey. The goal was to collect five red stamps to complete the game.

Our players were off to a bad start. They all descended onto the small welcome desk at the One Stop Shop looking to receive their first stamp. A long queue quickly formed, held up by the fact that the staff only spoke Greek. What’s more, the receptionists weren’t particularly helpful or welcoming. Most people waited patiently while others demanded priority: I’m pregnant someone yelled. I’ll pay for my stamp someone else tried. 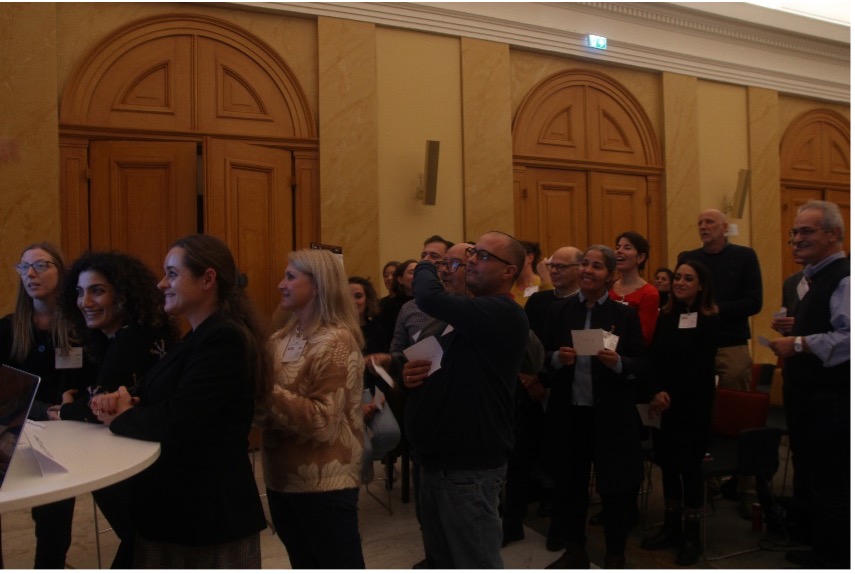 Luckily, the overwhelmed staff at the welcome desk eventually thought of a solution and started to hand out little cards with a website address to a digital resource where people could apply for their stamp online and the crowd dispersed to other service desks in search of their next stamp.

Players in search of their next stamp quickly found the second service desk in the One Stop Shop. Here they came across a fellow city administration colleague in a heated debate with a local politician, trying to convince her to invest in a One Stop Shop. It’s a win-win he cried. It’s such a cost-effective model! It will move migrants towards independence and into the labour force quicker!’ The politician wouldn’t budge. Look the city administration worker said bringing agencies under one roof to develop accessible, cohesive and transparent procedures, strengthens the capacity of private and public institutions.

Our players nodded quietly, collected their second stamp and looked around for the next service desk.

What did they learn here?

Use arguments such as:

Once they found their way to the third service desk, our players started to relax. They were greeted by calm and friendly staff who asked them how their day had been. The approach at this desk was to focus on teaching people how to do it themselves, so instead of having their cards stamped for them, staff let them practice on a piece of paper before stamping their own cards. This helped our players understand the different steps they needed to take.

The staff were particularly helpful to some of the players, giving them directions to the Foreigners’ Office which was located outside the One Stop Shop. What happened there we’ll soon find out… 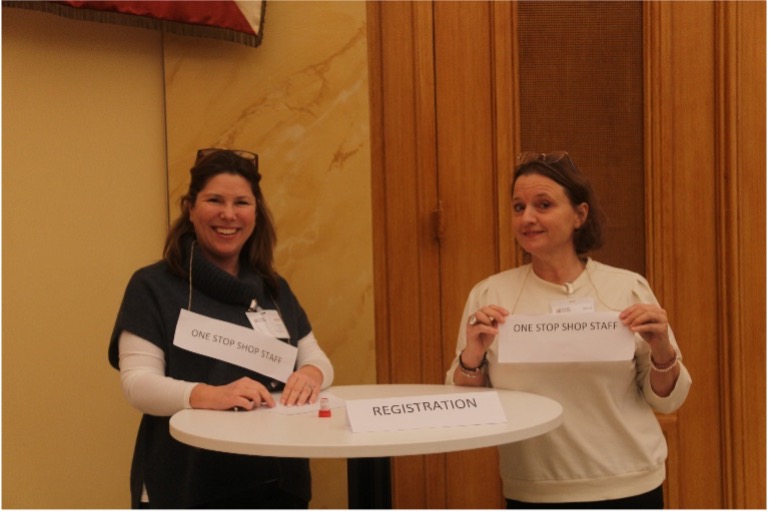 Things got heated outside the Foreigners’ office. Although it was located away from the main One Stop Shop space – in the hallway of the conference room – players quickly worked out that is where they needed to go for their fourth stamp, and a big crowd formed.

A glum security guard stood by the door, turning people away, checking people’s ID cards and handbags. The audience members tried all sorts of arguments to be let through, but the security guard wouldn’t budge. Only those with appointments were allowed in.

The lucky few emerged confused. Instead of a red stamp, they had been given a black cross. Would that count towards the five stamps they had to collect?

Some organisations, especially larger and more bureaucratic institutions, may struggle to adapt to become part of a new setup. Common challenges include:

Potential solutions to this challenge:

When our players arrived at the integration desk, they were asked to form an orderly queue. The queue moved along fine, albeit a little slowly, when suddenly, an alarm went off.

Staff quickly found their composure and explained to everyone that this was a crisis situation. They calmly moved everyone to the other side of the room, away from the fire. Once everyone was in a safe place, they handed out pre-stamped cards to the visitors. 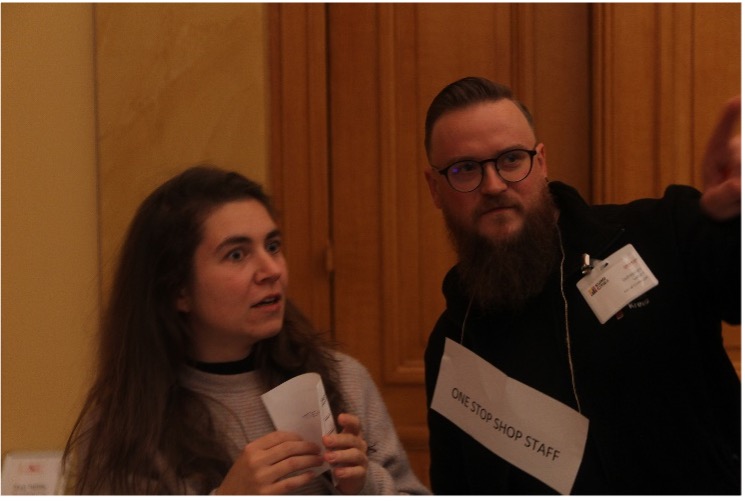 For a step-by-step guide on how to set up a One Stop Shop for migrant integration in your city, head to the Connection website.